The New York Public Library podcast is one of the best interview series, especially if you’re a self-confessed bookworm like me. This week I downloaded a much overdue listen – feminist icon and activist Gloria Steinem in conversation with Roberta Kaplan, the attorney who successfully argued the landmark U.S. Supreme Court ruling, United States V. Windsor case.

The creator of the magazine Ms. and a founder of the Women’s Media Center, Steinem talks about reproductive rights, why she dedicated her book My Life on the Road to Dr. John Sharpe, a doctor who performed an abortion for her in 1957, and how the women’s movement and gay rights movement can work together and learn from each other in the pursuit of justice and equality. There’s also a lovely bit where Gloria talks about touching the igneous rocks in Central Park to remind herself that there once was a time when patriarchy was not the only way; in fact, for 95% of human history, before colonisation and monotheism, it wasn’t. I listened to this interview on a day when I felt particularly defeated by the patriarchy and it was exactly what I needed. 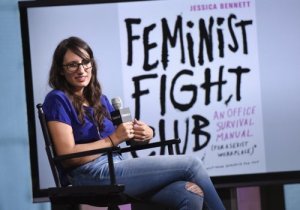 If I recommend Girl Boss Radio any more, I’m pretty sure Sophia Amoruso is going to take out a restraining order against me but here we are. As a feminist and journalist, I loved this interview with New York Times columnist and Feminist Fight Club author Jessica Bennett. She talks about how she got into journalism by on the crime beat, how she banded together with her female colleagues when they discovered they were getting paid less than their male counterparts at Newsweek (yes, the same publication at the centre of a landmark case on gender discrimination in the 70s) and why there’s a need for a Feminist Fight Club. If you’ve ever had a man receive or take credit for your work – AKA a bropropriator – you’ll enjoy this podcast. 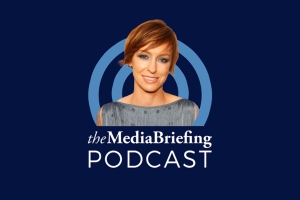 Can print survive in the digital era? Oh yes, that old chestnut again. As a writer who still loves the feeling of pages and the thrill of seeing my byline in print, I’m slightly biased in my interest in the print vs digital debate. A trade podcast for media professionals, the Media Briefing interviewed Glamour’s Editor-in-Chief about how Glamour – Britain’s biggest selling women’s glossy – is innovating in the face of the challenges of the internet. She raises some really interesting points such as the fact that print is a safe space for women free from trolls and also that instant is not always better. 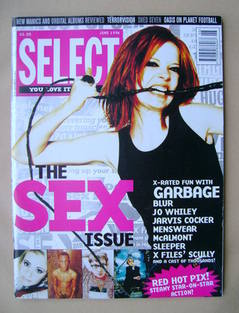 I still have a Select magazine (only the greatest music mag of all time) from 1996 with Shirley Manson on the cover. Along with my issues of SPICE, the official Spice Girls magazine, you could say it’s a prized possession and one of the reasons super-precocious me wanted to become a music writer. Since then I’ve continued to worship at the Garbage altar. If you’re a fellow Shirley Manson admirer, you’ll enjoy this Nerdist podcast interview where she talks about being afraid 24/7 when she was in her 20s, how a record label scuppered her solo album plans, how when Garbage was first released randomers would shout ‘you’re shite!’ at her on the street (gotta love Glasgow)…and a possible sighting of Jason Segel in a car park. There’s also an interesting bit where Shirley says that shyness is actually grandiosity. It ain’t all about you, love! Shirley Manson, you’ll forever be my #1 crush.

One thought on “Podcast recommendations #7: This Week I’ve Been Listening To…”